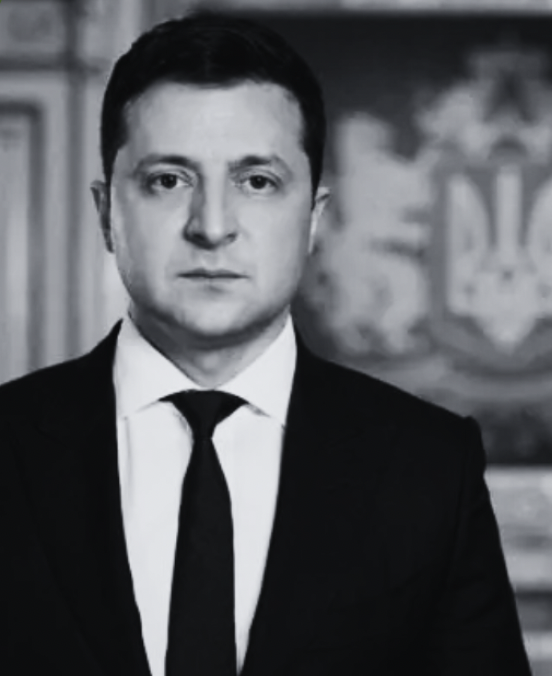 In recent months, the name Volodymyr Zelensky has been on everyone’s lips. The Ukrainian comedian and actor was thrust into the spotlight when he ran for, and won, the presidency of Ukraine.

Though many considered his candidacy a long shot, Zelensky proved that he was a force to be reckoned with when he took office in May of 2019. Since then, he has made headlines with his unorthodox approach to governing and his frank speaking style.

In this blog post, we will take a look at some of Zelensky’s most memorable quotes from his time in office thus far.

1. “I know that a lot of misinformation and rumors are being spread now. In particular, it is claimed that I have left Kyiv. I remain in the capital, I am staying with my people. My family is not a traitor, but a citizen of Ukraine. According to our information, the enemy marked me as the number one target. My family is the number two goal. They want to destroy Ukraine politically by destroying the Head of State.”Volodymyr Zelensky

2. “How can I be a Nazi? Explain it to my grandfather, who went through the entire war in the infantry of the Soviet army, and died a colonel in an independent Ukraine. You are being told we hate Russian culture? How can someone hate culture? Any culture? Neighbors always enrich one another culturally, but that does not make them one, does not dissolve us in you. We are different. But it is not a reason to be enemies. We want to determine our history by ourselves. In peace, calm and honesty.” Volodymyr Zelensky

3. “But if we come under attack, if we face an attempt to take away our country, our freedom, our lives and the lives of our children, we will defend ourselves. When you attack us, you will see our faces. Not our backs, but our faces.”Volodymyr Zelensky

4. “Our military, our national guard, our national police, our territory defense, special service, nationals of Ukraine, please carry on. We will win. Glory to Ukraine. We are successfully holding back the enemy’s attacks. We know we are defending our land and the future of our children. Kyiv and the key areas are controlled by our army. The occupiers wanted to set up their puppet in our capital. They didn’t succeed. On our streets, there was a proper fight going on.”Volodymyr Zelensky

5. “Our main goal is to finish this slaughter. The enemy losses are very grave — today there were hundreds of killed soldiers who crossed our border and came on our land. Unfortunately, we also suffer losses.”Volodymyr Zelensky

6. “Today, at the initiative of the Russian, the first round of talks between Ukraine and Russia took place. These talks took place while our terrority and cities were being bombed, being shelled. We could see the synchronization of the shelling with the negotiation process. I believe that in this unsophisticated way Russia is trying to put pressure. Don’t waste time. We do not accept such tactics. Fair negotiations can happen when one side does not hit the other side with rocket artillery at the moment of negotiations.”Volodymyr Zelensky

7. “We will build the country of opportunities, one where all are equal before the law and where all the rules are honest and transparent, the same for everyone. And for that, we need people in power who will serve the people.”Volodymyr Zelensky

8. “If there is no Ukrainian strong army, there will be no Ukraine, and that will be the case when everyone will understand… it’s not the war in Ukraine, it’s the war in Europe. We are defending our country, our land. We are not attacking anyone, because that is immoral.”Volodymyr Zelensky

9. “I would never want Ukraine to be a piece on the map, on the chessboard of big global players, so that someone could toss us around, use us as cover, as part of some bargain.”Volodymyr Zelensky

10. “Now, when it comes to a threat beyond Ukraine’s borders, there’s something very powerful standing in his way. That’s Article 5 of NATO: An attack on one is an attack on all.”Volodymyr Zelensky

11. “The war is a big disaster, and this disaster has a high price. With every meaning of this word. People lose money, reputation, quality of life, they lose freedom. But the main thing is that people lose their loved ones, they lose themselves.”Volodymyr Zelensky

12. “The Ukrainian nation, as no other nation, understands and is fully aware of the tragedy and its scale of all the lost lives of the Ukrainian Jews during the Second World War.”Volodymyr Zelensky

13. “I respect Israel as hugely special, especially given all the sensitivities around it. The Jews managed to build a country, to elevate it, without anything except people and brains.”Volodymyr Zelensky

14. “Honoring the memory of the victims of the Holocaust, in which more than two million Ukrainian Jews died, Ukraine calls on Israel to also recognize the Holodomor as an act of genocide against the Ukrainian people.”Volodymyr Zelensky

15. “This is larger in scale and scope in the massing of forces than anything we’ve seen in recent memory, and I think you’d have to go back quite a while into the Cold War days to see something of this magnitude.”Volodymyr Zelensky

16. “According to our information, the enemy marked me as target No. 1, my family as target No. 2. They want to destroy Ukraine politically by destroying the head of state. We have information that enemy sabotage groups have entered Kyiv.”Volodymyr Zelensky

17. “You [Vladimir Putin] are told we are Nazis. But can a people support Nazis that gave more than eight million lives for the victory over Nazism? How can I be a Nazi? Tell my grandpa, who went through the whole war in the infantry of the Soviet Army and died as a colonel in independent Ukraine.”Volodymyr Zelensky

18. “I really do not want my pictures in your offices, for the President is not an icon, an idol or a portrait. Hang your kids’ photos instead, and look at them each time you are making a decision.”Volodymyr Zelensky

19. “Every morning my day begins with an SMS from the General Staff. Over the past 24 hours there were 7 occasions of shelling and two casualties. Figures may vary, but only one figure makes the morning good. It is zero. The shelling is zero. The loss is zero.”Volodymyr Zelensky

20. Zelensky Quote About Having Faith: “Faith is something we never discuss at the dinner table in my family, but I do believe in God.”

21. Importance of Ukraine: “I would never want Ukraine to be a piece on the map, on the chessboard of big global players, so that someone could toss us around, use us as cover, as part of some bargain.”

22. Ukraine As Model For All Countries: “To all the countries of the former Soviet Union: look at us; everything is possible.”

24. Building A Stronger Country: “Let’s build a country of opportunities, where everybody is equal before the law and where the game’s rules are honest and transparent, and the same for everyone.”

25. Change The System: “I am not a politician. I am just a simple person who has come to break down this system.”

26. President Can Be the Role Model: “The president can’t change the country independently. But what can he do? He can give an example.”

27. On Ukrainian Forces: “If there is no strong Ukrainian army, there will be no Ukraine, and that will be the case when everyone will understand… it’s not the war in Ukraine; it’s the war in Europe. We are defending our country, our land. We are not attacking anyone because that is immoral.”

28. Doing Good: “I do not try to play a role. I feel good being myself and saying what I think.”

29. People Must Speak Up: “It’s a victory when the weapons fall silent, and people speak up.”

As you can see, Volodymyr Zelensky is a very quotable man. What’s your favorite Zelensky quote? Share it with us in the comments! And don’t forget to check out our website for the best China proxies around.

We know how to help businesses get ahead online and we can do the same for you. Thanks for reading and have a great day!