How to Use APIs?

I’m pretty sure if you’re on this page, you must have confused yourself with how to use API’s, right? I mean the title is clear, so yeah that’s what this article is about, and of course, you’re more than welcome to get along this guide, ofcourse I’m making it detailed and illustrated, so trust me by the end of this piece you’ll have a clear picture of How to use APIs.

Well like all of my articles I like to introduce the topic a bit before actually going on the deep adventurous ride into it, so well keeping the traditions up let me tell you…

Well no its not that simple, but if you seriously want the complicated but specific definition of it, then it reads something like “ This is the interface that specifies how your application will interact with other components, it is specifically important and comes in to use while designing graphical user interfaces”.

Of course, it’s not a scientifically established definition but, it was the easiest explanation I could give birth to in my mind to explain to you what an API is, in the simplest possible form.

What are the Uses of APIs?

I already told you, it makes programming easier.  But well that’s not really what you are looking for, huh? I mean I am pretty sure you’re looking for more concrete, specific answers,  well I know that so let me give it to you.

The one greatest benefit of APIs right now in 2016 is that API lets you connect one app, application, or just about anything online to something else.  I mean have you seen all those third party Amazon stores, which are not exactly Amazon but are promoting Amazon products? Well, that’s API that makes it possible.

Not just that,  it might come as a surprise to you, but the copy paste which you are so fond of, is also a gift of API integration into Microsoft Windows or maybe your Mac.

Oh hey, guess what, in a simpler environment probably you can imagine this, take API To Be the bricks,  on which your house is built, and the programmer takes the bricks up and makes the house (meaning the application).

So ya its like the API is the modulated form of a lot of elements, and its up to the programmer to design them and make use of them as he wishes, but in a nutshell, I can say that the API makes it a lot easier for programmers to work on their app, simple as that.

How to Use APIs:-

Unless you are trying code an app from scratch, there’s not a lot of meddling you have to do  With the code.

For example, in most cases, you will have a box you just have to embed the API from the program which you are trying to link, and it’s done.

Ok let me show this to you as an example, I will try to link the optinmonster plugin that comes for WordPress, with my email client that is MailChimp.

See? I get to the screen where it asks me for the API; this is the only place where I’ll be ever asked for an API with OptinMonster (And for most of the tools on the internet, it’s almost the same, after all, they all are advanced enough). 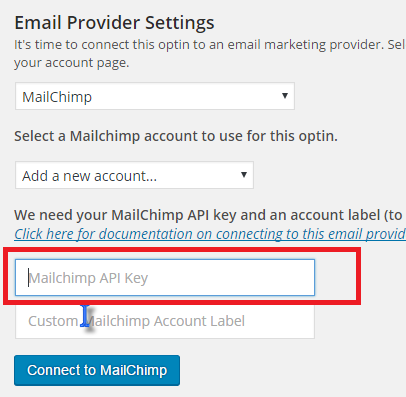 Now, all I have to do is, copy paste the API from the service I’m trying to connect. (For e.g.,. from Mailchimp).

So see? That was how easy it was for me to use the Mailchimp API and integrate it with my OptinMonster.

Well this is how you integrate almost all the platforms online, because it’s the easy way (and the only way they allow you to.) But what if you’re not looking to integrate two plugins or online tools? But something totally from scratch?

How to Use APIs: – The Long Way Around…

See Also: How To Install WordPress Locally With MySQL

I already said, it’s not that you will always want to use an API only to link to online plugins, software and tools right?

Well let me take you the other way round, this definitely is a bit more complicated and is not straight forward, but this is what you’re asking for, right?

Okay so, first of all, keep this in mind that every API key is slightly different from the other, but they have the same basic building blocks, think of it in a way that every house you live in is built almost with the same stuff, right?

I mean they all comprise of the pillars, doors, windows, and the roof right? So that’s about how an API works, they are not the same, but if you take a deeper look into it, you’ll understand what they are made of.

And once you to understand what they are made up of, all you have to do is alter the values and keys you want with your own data and then you can receive almost anything you want of that API key.

For an example let us take the following API key:-

Now here is the point, every API looks almost similar, so you just have to understand what it is saying, and you have to make it say something different something that you want simple as that.

Breaking Down the Above API:-

See? Nothing very “complicated” in the real picture huh? You can manipulate that API any way you wish for, change values and get your hands on what you’re asking for. (Ofcourse, as long as the data you’re looking for isn’t protected.)

See Also: How to Update WordPress in Easy Steps?

Okay I know, one example might not make things to you as clear as I want them to be, so well let’s take another example of a Twitter API.

Just now I had this idea of including a resource center section in all of my future articles, technically what I will do is in this section I will just list out some of the more day to day and frequently used links, tools and Apps that you might need along with the specific articles.

So over here I’m listing some of the most common API centers you might be interested in:-

So I’m hoping this piece solved your curious mind’s queries regarding How to use APIs, right? Although it’s totally possible to still be confused about certain points or aspects of this article that might not have been totally clear to you.

Guess what, that’s why the Comment boxes have been placed down below guys, make use of it, trust me I reply to each and every one of them.