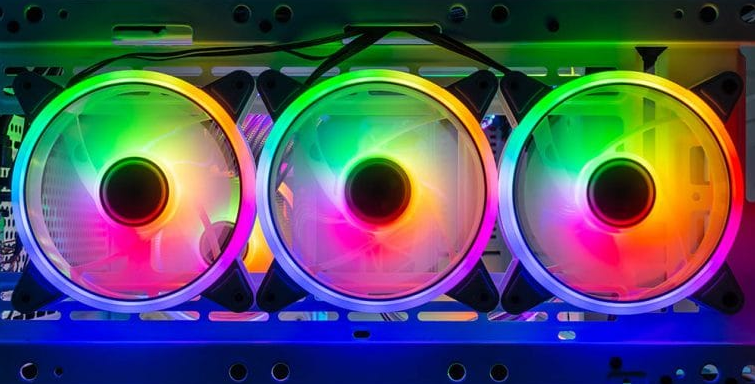 Want to know how RGB differs from ARGB, and which one is better?

The number of PC lighting options (and their ads) has grown significantly in recent years, so people are often confused about which one to choose.

ARGB, which stands for “Addressable RGB,” is just a more advanced version of RGB. ARGB gives you control over each LED, while RGB lighting can only be set to show one color across all of its LEDs. ARGB lets you do cool things like change colors, flash, sync to music, and more.

For example, an RGB lighting strip might have 100 separate LED lights, but at any given time, all 100 lights will always show the same color. With 100 individual LEDs, an ARGB lighting strip could show 100 different colors at the same time.

That’s the short version, but we’ll go into more details to help you understand each choice and decide which one is better.

Modern PC lighting tech gives you a lot of options, whether you’re just starting out with RGB lighting or looking to upgrade your current setup.

RGB stands for the three colors red, green, and blue. It is used to make the lights in Televisions, computer monitors, smart phones, tablets, and other electronic devices. Red, green, and blue are called the primary colors because they are the ones that make up every other color on a screen.

In the last few years, the electronics industry, especially the PC gaming niche, has put a lot of effort into making products look better than they did in the past. In addition to plastic,  glass, metal RGB lighting devices are also used.

With this lighting, the computer is less of a work tool and more of a visual treat. Even a color screen that doesn’t move can make a PC and your room look better.

ARGB stands for “Addressable RGB,” and this technology gives you more control over each individual LED light level in your RGB lighting. You can change the colors of each LED and set them to do things like flash, breathe, move in time with sounds, etc.

Because of ARGB, RGB technology has come a long way in the last ten years.

Check out this video by a YouTuber who does a great job of showing what ARGB can do on something as simple as a PC case fan:

ARGB can be used on a wide range of devices, so if you feel like your laptop or PC doesn’t have enough bling, ARGB can help a lot.

All of this is done through the software in the controller box, which is very easy to use and lets you easily control all of the ARGB lighting devices at the same time.

Again, the unique features here include the ability to make your devices change colors in a breathing pattern, screen mirror, or even to the beat of the music you are listening to, turning your work or play space into your own personal nightclub.

What is the advantage of ARGB over RGB?

ARGB products not only look good, but they can also make your PC experience better by giving games and music more lighting effects, which RGB can’t do.

It’s pretty cool to have all of your lights change to match what’s on your computer screen at any given time.

ARGB is just the next step after RGB lighting. So, if you want to add lighting to your PC or build one from scratch and you want to use ARGB, we recommend that you do so.

Does RGB or ARGB Affect Performance?

Even though you may have heard jokes or serious claims about RGB or ARGB lighting, it won’t affect how well you play games. The lighting doesn’t change how much your CPU is used, and it doesn’t put much stress on your graphics card. If you have a bad product, it might cause problems, but you could say the same thing about any computer product.

Most of the time, users make up the idea that their performance is better or worse because of the RGB lighting because they want their purchase to seem more important than it really is.

This rumor is based on the fans that come with these products and the idea that blue lighting can cool down your PC more, making it work better for games. It’s nonsense and a way for them to make their purchases look like they were bought for more than just looks.

Most PC products will change your computer in more than one way. When a new piece of hardware is added to your PC for the first time, it usually stands out in some way, either because of how it looks or how well it works.

What devices Come with ARGB or RGB?

How many devices does a computer have? Because that’s usually the limit when we talk about what RGB and ARGB lighting can be used for.

RGB lit keyboards are a very popular thing out there. It gives your boring old keyboard a little more personality when you let your controller decide what the lights do based on what you are doing.

You can make the lights bounce to the music you’re listening to, or in some games, the lights can do different things depending on what you do in the game.

The same is true for RGB-lit mice that do the same thing. There are always people who prefer more calm and quiet lighting, and if you’re one of them, you can always have a static lighting effect on if you want.

Which Is More Expensive?

Devices with this kind of lighting can have very different prices depending on what they are. RGB RAM will cost a lot more than regular RAM, but an RGB-lit keyboard might not be that much more than a keyboard that doesn’t light up.

But if you compare the prices of ARGB products to those of standard RGB products?

Most of the time, there isn’t much difference between these two. ARGB products may cost a little bit more than RGB products, but they aren’t that different in terms of price or how they work. It really depends on the situation.

Even though RGB lighting started out as a way to make computers look better, ARGB has taken it to the next level and made PCs better to use.

The experience will be better not because of better performance, but because lighting systems will be able to be changed on the fly and work with other systems, like dancing to your music or changing colors in games.

The second one is especially cool because it can light up red when you take damage in a game, which really helps you get into the game.

Both RGB and ARGB products are very close in price, so it shouldn’t really matter which one you buy unless it doesn’t work with your system.

There are some motherboards built specifically for only supporting RGB or ARGB, but not both. If you want to have devices that light up, you should first make sure the Motherboard is built to handle it.

Aside from that, there are a lot of devices that use lights these days, so if you want your PC to glow like something from a spaceship, you can do that with ARGB.