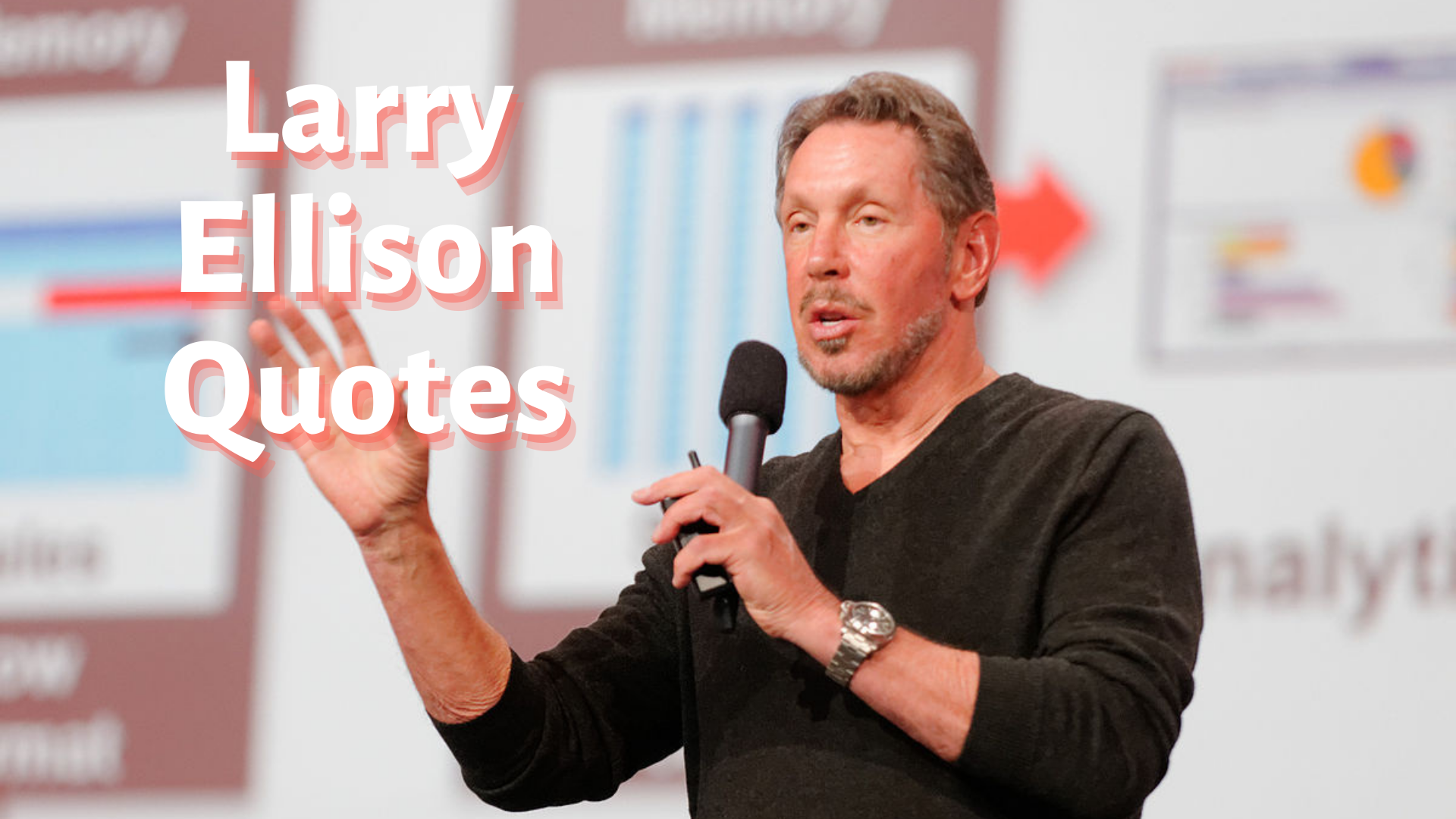 Ellison has always been the champion when it comes to going after what he wants in life. Not only does he own one of America’s largest islands, but also took on an entire company with his two friends and made them prosper into something greater than anyone could have imagined!

When Larry took Oracle public on March 12, 1986; he became a millionaire in the process. Namely with 39% ownership at that time and ended up netting himself $105 million by day’s end (in paper). Coincidentally Bill Gates also went public on one day which made him even more powerful than before as well!

I own a home in Kyoto, Japan actually on the temple on grounds in Nanzenji that is going to become a Japanese art museum. – Larry Ellison

When you innovate, you’ve got to be prepared for everyone telling you you’re nuts.- Larry Ellison

Bill Gates is the pope of the personal computer industry. He decides who’s going to build.- Larry Ellison

A corporation’s primary goal is to make money. Government’s primary role is to take a big chunk of that money and give it to others. – Larry Ellison

Our goal is very simply to become the desktop for e-businesses. – Larry Ellison

The social network is the paradigm of the modern service application.- Larry Ellison

It’s surreal to think that I own this beautiful island. It doesn’t feel like anyone can own Lanai. What it feels like to me is this really cool 21st-century engineering project, where I get to work with the people of Lanai to create a prosperous and sustainable Eden in the Pacific.- Larry Ellison

I’m in two modes when I’m on Lanai: In engineering mode, I’m trying to find the right place for the reservoir and the desalination plant, and looking at designs for new hotel rooms. The rest of the time, I’m in decompression mode. I’m on Hulopoe Beach, going for a swim, or on my paddleboard surrounded by 100 spinner dolphins. – Larry Ellison

I believe people have to follow their dreams – I did. – Larry Ellison

We think we’re going to be especially strong in platform where we have our two platform brands: our database brand is the Oracle Database 12c, and our programming language brand is this thing called Java. – Larry Ellison

We’ve announced an Oracle Virtual Compute Appliance, a bunch of low-cost commodity servers running Linux, integrated in our case, with InfiniBand – connected with InfiniBand vs. the traditional Ethernet. – Larry Ellison

We have an ideal location for a couple of organic wineries on the island. But the reintroduction of commercial agriculture to Lanai is 100% dependent upon increasing the available water on the island. So we’re going to use solar energy to convert seawater to fresh water. – Larry Ellison

They don’t call it the Internet anymore, they call it cloud computing. I’m no longer resisting the name. Call it what you want. – Larry Ellison

We have most of the software industry running Autonomy. – Larry Ellison

We think a modern cloud lets you decide when you want to upgrade. We don’t decide for you. – Larry Ellison

Oracle’s latest database, version 12c, was specifically designed for the cloud. Oracle 12c makes all your Oracle applications multitenant applications without you having to make any changes whatsoever to your applications. – Larry Ellison

When I was a kid a long time ago, when the sun rose, I was outside on my bike. If my parents were lucky – poor parents! – I would be home before it got dark. – Larry Ellison

It’s Microsoft versus mankind, with Microsoft having only a slight lead. – Larry Ellison

I have had all of the disadvantages required for success. – Larry Ellison

I am so disturbed by kids who spend all day playing videogames. – Larry Ellison

I started NetSuite. NetSuite was my idea. I called up Evan Goldberg and said, ‘We’re going to do ERP on the Internet, software-as-a-service.’ Six months later Marc Benioff, finding out what NetSuite was doing, and kind of copied it.- Larry Ellison

What is Oracle? A bunch of people. And all of our products were just ideas in the heads of those people – ideas that people typed into a computer, tested, and that turned out to be the best idea for a database or for a programming language. – Larry Ellison

When you write a program for Android, you use the Oracle Java tools for everything, and at the very end, you push a button and say, ‘Convert this to Android format.’ – Larry Ellison

Oracle’s got 100+ enterprise applications live in the #cloud; today, SAP’s got nothin’ but SuccessFactors until 2020. – Larry Ellison

What is Oracle? It’s people. We rely on our HR department to build this organization, to help find those people, to help grow those people. – Larry Ellison

One of the great things about Lanai is that the weather is always fabulous. Always 82 degrees and sunny. The problem is that, like California now, Lanai needs more water. – Larry Ellison

My favorite museums are things like the Frick Museum in New York and the Huntington Hartford in Pasadena where it’s someone’s home that you walk through.- Larry Ellison

I wish HP nothing but the best. I think HP is an icon. Those of us who had their careers in the Valley think of Dave Packard and Bill Hewlett as role models. We would love to be half as good as they were. – Larry Ellison

Autonomy was shopped to us. We looked at the price and thought it was absurdly high. – Larry Ellison

We’ll continue to expand our footprint… Oracle’s Fusion cloud applications for HCM, CRM and ERP all have a new simplified user interface and an integrated social network that makes our enterprise applications as easy-to-use and familiar as Facebook, while enabling better collaboration and teamwork among your employees and your customers. – Larry Ellison

Be careful about virtual relationships with artificially intelligent pieces of software. – Larry Ellison

Game-playing is more fun when it’s virtual because you’re more successful. … in reality, only one person gets to be LeBron.- Larry Ellison