How to Find the Average in Excel?

In conversational language, an average is the sum of a list of numbers divided by the number of numbers that are imbibed in that particular list. In mathematics and statistics, this would be called the arithmetic mean.

Let’s have a look at how do you find the average:

As discussed above, the mean is the sum of the value of each observation in a dataset divided by the number of observations. This is also known as the arithmetic average. In simple words, the sum is divided by the count. Also, learn to divide in Excel.

Example 1: Let’s have a look at the distribution:

The sum of these numbers is 330

There are fifteen numbers.

Thus, the mean of the above numbers is 22.

Example 2: Let’s have a look at the distribution:

The mean for this example is:

You can write a mean as a decimal number or round to a whole number. Thus, the mean is 11.

Example 3: Let’s have a look at how to handle negative numbers:

Thus, the mean of the above numbers is 2.

Options for Entering the Function

Basically, there are three options for entering the functions in Excel. These are:

Now let’s study each of them in detail-

How to Find the Average in Excel

Microsoft Excel is an ideal program to perform any numerical analysis such as computing the mean, median, mode and range for a set of numbers. Expect for calculating range, the Excel has a built-in function of how to calculate average. Let’s have a look at the steps:

Now, let’s have a look as to how the function dialog box operates, via following the enlisted steps:

How to Calculate Weighted Average Mean

Usually, when the average is calculated, we put same weight or priority to each value, this is called un-weighted average. If you have really big data for addition, you should take a look at adding numbers in excel.

When weight is also taken into consideration while finding the average, it is known as weighted average. To find the weighted mean:

Note- In case, you have very high or very low values in your data set, the weighted mean may not be a good statistic to rely on.

How to Calculate Weighted Average Mean in Excel

First of all, for how to find an average, you need to have knowledge of Excel SUMPRODUCT function. SUMPRODUCT is simply, multiplying each number with its weight and then adding all of the products together.

Follow the following process for the same in Excel: 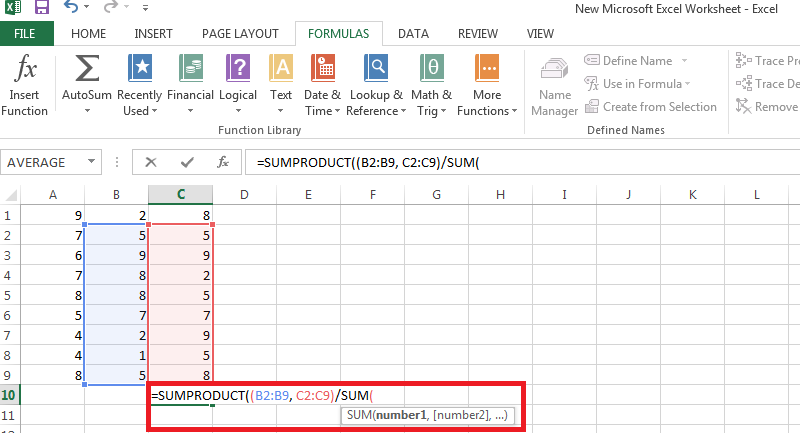 Sometimes by default, Excel displays a zero in cells with a zero value. So turn off this option in order to avoid errors and inconvenience. Once this option is turned off, such cells are left blank, but are still included in average calculations.

Computing the numbers on excel is easy but to make it the numbers presentable, you may need some graphics. Here is how you can create bar graphs in excel to make the data presentable and understandable.

Working on Excel may seem tough in the beginning, but once you are eloquent about it, the work becomes comparatively simpler and easier. How to find the average is a function most widely used by professionals while making reports or during calculations.

So go ahead, and calculate the averages in a simplified way!